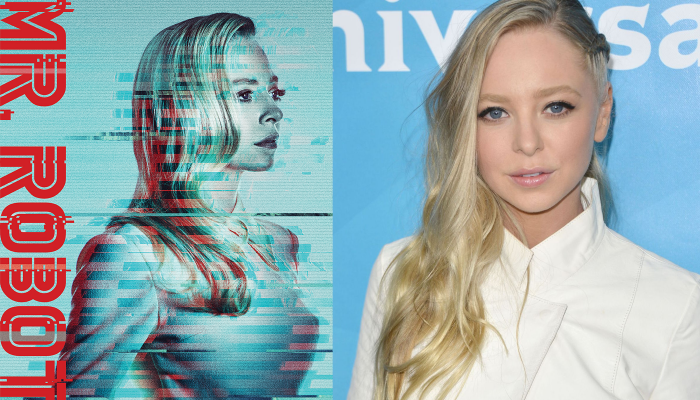 Portia Ann Doubleday (born June 22, 1988) is an American actress. She has appeared in the 2009 film Youth in Revolt as Sheeni Saunders, in the 2011 film Big Mommas: Like Father Like Son as Jasmine Lee and in the 2013 film Carrie as Chris Hargensen. Since 2015, she stars as Angela Moss in the USA Network television drama, Mr. Robot.

Doubleday was born and raised in Los Angeles, California, she is the younger of two daughters raised by Christina Hart and Frank Doubleday. She grew up in a show business family: her parents are former professional actors and her older sister, Kaitlin, is also an actress. Her mother now works in the entertainment industry as a writer and producer of plays. Doubleday attended the Los Angeles Center for Enriched Studies, a magnet school in west Los Angeles. She described herself as a tomboy to the Los Angeles Times, having played soccer for twelve years.

Doubleday first appeared in a commercial for Goldfish crackers at age eight and had a small role in the film Legend of the Mummy (1998). Her parents insisted that she finish high school before pursuing a career in acting. Doubleday was cast in the pilot episode of United States of Tara, a television series created by Diablo Cody. Doubleday played 15-year-old Kate, the daughter of Toni Collette’s character. Doubleday was replaced by Brie Larson when the series’ creative team chose to go in a different direction with the character. She appeared in the short film 18 in 2009, about a girl dealing with the end of her mother’s life.

Doubleday starred opposite Michael Cera in the teen comedy Youth in Revolt (2009), based on the 1993 novel of the same name by C.D. Payne. Doubleday described her character as “mean” and “really complex” to the Los Angeles Times. She plays Sheeni Saunders, an imaginative girl with a dreary life who meets Nick Twisp (Michael Cera) while on a family vacation. The film, directed by Miguel Arteta, premiered at the 2009 Toronto International Film Festival.

She was working on the film Touchback, based on an award winning short film and is working on another short with actor Alex Frost, directed by Marvin Jarrett (the founder of Nylon magazine).

Doubleday appeared regularly in the ABC network comedy Mr. Sunshine, a midseason replacement for the 2010-2011 season.

She played the popular and monstrous Chris Hargensen in the 2013 adaptation of Carrie. Doubleday dyed her hair brown for the role of Chris, who is a natural brunette in the novel.

In May 2015, Doubleday appeared in the USA Network pilot for the TV series, Mr. Robot, starring Rami Malek and co-starring Christian Slater. Doubleday plays Malek’s character’s childhood friend and current co-worker. The first episode of the series premiered on June 24, 2015.